Fab Lab Tulsa is an IRS qualified 501 (c) (3) tax exempt; not-for-profit makerspace located in the Kendall-Whittier neighborhood of Tulsa. Fab Lab Tulsa delivers education, community, workforce and business programming that teaches innovation, design-thinking, problem-solving and change-making. In addition, the lab provides open and equitable community access to advanced manufacturing and digital fabrication tools, equipment, technology and resources. Fab Lab Tulsa is one of over 1,800 MIT-chartered Fab Labs in more than 78 countries, it is one of a very few independent non-profit labs in the United States, and the first in the southeastern region of the U.S. Furthermore, we are one of the top labs globally in terms of leadership, organization, support, size and capabilities, illustrating the impact a fab lab can make on a community.

The Fab Lab (fabrication laboratory) concept was developed at MIT by Professor Neil Gershenfeld, founder and head of the Center for Bits and Atoms, who developed a very popular course titled “How to Make Almost Anything.” As part of the class, he gave his students access to a fabrication laboratory containing some very basic cutting, milling and electronic tools. What he found, not surprisingly, is that there was no end to what his students could create when given access to simple tools, equipment and resources. Through a collaboration with Mel King at the South End Technology Center at Tent City, they put the same resources available to MIT students in a community space, giving ordinary people the ability to make whatever they want. Inspired by the transformative results, Dr. Gershenfeld encouraged others to open similar Fab Lab’s in their own communities around the world. We follow The Fab Charter, support the Fab Foundation, are a member of the United States Fab Lab Network, a partner with Fab Lab Hub, and participate in the global Fab Lab community. 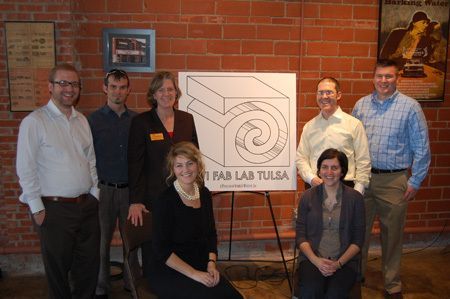 The Fab Lab Tulsa team formed initially in the Fall of 2008 following inspiration from a local aerospace company. The group’s first caretaker was Community Action Project of Tulsa County, which funded a visit to MIT and the South End Technology Center. Shortly thereafter, at the beginning of 2009, the team began a partnership with Kendall Whittier, Inc., a non-profit dedicated to improving the lives of residents of the Kendall Whittier neighborhood. This was especially fortunate because the team had already identified the neighborhood as an ideal location for Fab Lab Tulsa because of the area’s walkability, central location, economic needs and its proximity to the University of Tulsa. With Kendall Whittier, Inc. the project blossomed. Starting in July 2009, the team attracted its first donor, as well as an abundance of community goodwill. In the Summer 2010, Fab Lab Tulsa, Inc. was formed in order to bring Fab Lab Tulsa to fruition. As an independent Oklahoma non-profit corporation, Fab Lab Tulsa, Inc. operates in the Kendall Whittier neighborhood serving our immediate neighbors, as well as the greater Tulsa area and surrounding rural areas of Northeastern Oklahoma. The named sponsor for the project is the Hardesty Family Foundation. and during the grand opening ceremony in September of 2011, the facility was dedicated as the Hardesty Center for Fab Lab Tulsa. After more than 10 years of service, the lab constructed a new facility to expand our capacity and increase our impact. The new 14,000 square foot building at 501 S. Lewis Ave. in the Kendall Whittier neighborhood is a vibrant and inclusive space that leverages the power and the value of the maker. The Fab Lab Tulsa facility was dedicated in April of 2022 as the Hardesty Hub for Makers.